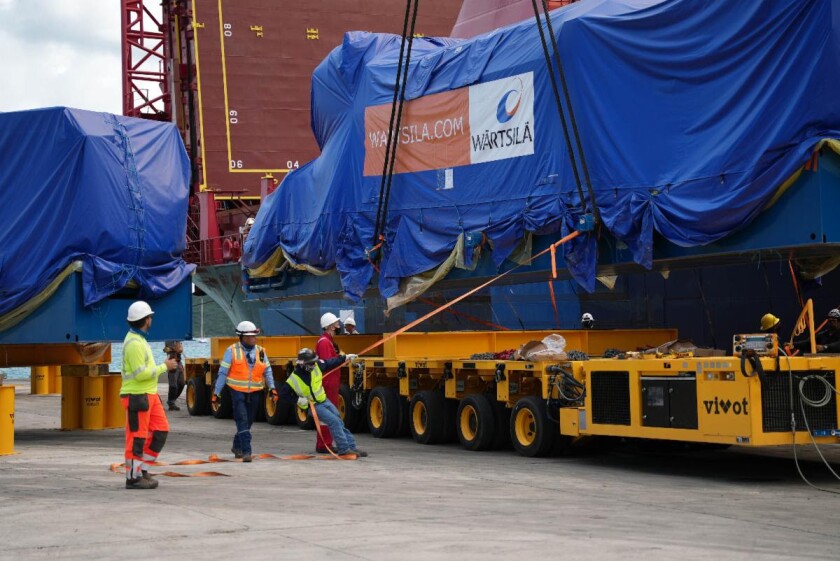 The U.S. Virgin Islands’ economy is small, lacks diversity with revenues concentrated in just a few sectors and faces many challenges to its long-term viability.

However, there are positive signs the territory’s economy can be boosted by certain areas of exploration, via the University of Virgin Islands Research and Technology Park, transshipment efforts, the digital and so-called blue economy.

The Virgin Islands government “has taken an incredibly active role in strengthening the economy through its public-private collaborations and new economic development policies,” said Biko McMillan, senior policy analyst at the U.S. Virgin Islands Bureau of Economic Research. “The government actively seeks to diversify the economy to not rely on one or two sectors.”

Many analysts say diversity is the real key for the USVI’s future viability.

Over the last year, analysts said, tourism has generally been recovering and that trend is likely to continue.

“The tourism sector suffered a significant blow in 2020 due to the COVID-19 pandemic,” McMillan said. “However, we saw an increase in tourism toward the last quarter of 2020 and throughout 2021, with some tourism indicators exceeding even their 2019 pre-pandemic equivalents.”

As tourism and global travel improve in the next few years, the outlook “is even more promising,” and estimates are it could add $1 billion to the territory’s economy in 2022, “matching pre-pandemic levels,” McMillan said.

The expected return of cruise ships to the island this year, would lead to a “robust season,” said U.S. Virgin Islands Sen. Donna Frett-Gregory.

Challenge: St. Croix oil refinery
The shuttering of the oil refinery on St. Croix’s south coast, which had been the territory’s largest private-sector employer, marked a major setback for the islands’ economy and government finances.

Limetree Bay Energy attempted to restart the refinery in 2019, but gave up this past summer and declared bankruptcy. The restart raised environmental problems and the federal government ordered pauses in refining.

In late December, a Jamaican oil storage company, West Indies Petroleum, successfully bid on the site, but they must complete the purchase this month. If that goes through, they plan to restart refining.

A continuing halt in refining would cost U.S.V.I.’s gross domestic product $632 million annually, according to the territory’s Economic Research Bureau. Some estimates suggest at least $1 billion is needed to restart the facility.

Frett-Gregory said, “there are uncertainties” as to whether the refinery will become a long-term profitable presence in St. Croix. “We will have to wait and see.”

Challenge: Electrical system
While the territory’s electrical system is a small part of its economy, it has a large and broad impact on that activity.

“The ongoing saga of [an] inefficient, high-cost, unreliable publicly owned utility — Virgin Islands Water and Power Authority — has deleterious impacts on the economy,” University of Virgin Islands Economics Professor Mark Wenner said. “It is probably the single most important constraint to economic revitalization and diversification in the territory.”

As of July 1, 2021, cost per kwh is 43 cents after the first 250 kilowatt-hour used for residential users and a flat 47 cents per kwh for commercial users, Wenner said.

“The U.S. Virgin Islands not only has the highest electric tariff of all 56 U.S. states and territories and the rest of the Caribbean, but it has one of the higher frequencies of service interruptions, ranking with Cuba, Dominican Republic, Haiti, and Guyana,” Wenner said.

“The administration is asking for patience and forbearance because WAPA supposedly has $2 billion in Federal Emergency Management Agency funds to rehabilitate itself and supposedly the installation of four efficient dual fuel generators in late 2022 will solve many of the utility generation problems,” Wenner said.

“The territory will depend more on solar power in the medium term, with some contributions from wind, and ocean tide and wave action in a distant future,” he said.

But every customer using solar power is one less customer for the financially troubled WAPA. The authority has already lost 16% of its customers to solar, Wenner said, and the percentage is likely to rise.

“The public utility has a host of problems that will not be solved by just access to federal grants,” Wenner said.

McMillan is more optimistic about the electrical sector.

Gov. Albert Bryan Jr. and his administration understand reliable and affordable electricity is an “essential factor in economic development and WAPA has begun to address this concern,” McMillan said. “In fact, while outages still occur, there have been fewer as of late.”

The local government’s role
“The government’s role should be to focus on our infrastructure, healthcare, energy, and expedited government service in order to retain and attract new businesses to the territory,” Frett-Gregory said.

While Wenner was positive about some government accomplishments, he said it still faces challenges from COVID and natural disasters.

Bryan and his administration have done well in disbursing COVID-19 stimulus funds and administering a COVID-19 mitigation program but have not succeeded in convincing people to take vaccination shots, Wenner said, and has been slow to disburse federal relief stemming from two devastating 2017 hurricanes.

However, the biggest immediate threat to government finance and credibility, he said, “is the failure to act to prevent the looming insolvency of the government employee pension system in 2023-2024.”

And the future of the islands’ fiscal position will also be determined by how the territory’s central government and Water and Power Authority can manage their more than $2 billion of outstanding bonds.

“A significant structural deficit combined with the expected insolvency of the USVI Government Employees’ Retirement System will likely lead the government to restructure its debt,” according to Moody’s.

The government plans to attempt to refinance its matching fund bonds, which it unsuccessfully attempted in recent years.It is unclear if the latest attempt will succeed.

The government is considering refunding at least $1 billion of its outstanding bonds for cost savings.

The non-investment-grade ratings reflect these pressures.

“As indicated by our CCC rating we believe that [WAPA] exhibits a very low margin for safety and that default is a real possibility,” said Fitch Managing Director Dennis Pidherny. “Moreover, our rating watch negative signals that the continuing threat of legislative initiatives that include the possible development of a debt consolidation and management plan, could increase risk to where a default of some kind is probable.”

Opportunities
“With the recent establishment of the free trade zone on St. Croix, we expect an uptick in various industries, including but not limited to manufacturing,” McMillan said. “The University of the Virgin Islands Research and Technology Park also is creating the environment for tech to be developed and thrive in the territory. We have also made great strides in reviving our horse racing and drag racing industries.”

Plans include reviving the Paul E. Joseph Sports Complex. The local government has been planning to renovate this abandoned and partly demolished stadium for many years. It could be used, among other things, as an off-season facility for professional baseball teams.

“There has also been an uptick in construction, in part due to continuous updates to our infrastructure,” McMillan said. “The government was also recently awarded more than $1.5 billion for [a] sewer system rebuild.”

For economic opportunities, Banco Popular’s Virgin Islands region manager Oran Roebuck also mentioned the sports complex and the Research and Technology Park at the UVI Medical School, which, she said, is expected to open in 2023. The latter could make the territory the leader in this sort of research in the Lesser Antilles, she said.

“One of the economic areas where the U.S. Virgin Islands has an opportunity to expand is in the maritime industry,” Frett-Gregory said. “The U.S. Virgin Islands is strategically located to access the Leeward and Windward Islands. Because of the uniqueness of our location, we can serve as a transshipment port not only for the Caribbean but [for] the Americas.

“We also have opportunities to expand our blue economy and partner with our neighboring island of Puerto Rico,” she said.

Besides expanding the “blue” economy, Frett-Gregory said the government is looking to add small distilleries, and attract small, boutique hotels.

In two to three years, Frett-Gregory expects the economy will be “diversified, robust, and vibrant.”

While economic growth is expected to be gradual, it will likely pick up in 2022, reaching pre-pandemic output levels, McMillan said.

“Looking further ahead, we project that the U.S. Virgin Islands economy will grow by 2.9% in 2023 due to infrastructure investments and strong visitor demand,” he said.

Roebuck believes the economy will remain in a growth pattern for the next few years because of the impact of federal funding, which will subsidize reconstruction projects for the next 10 years.

Wenner cautioned, though, that in two or three years, the U.S. Virgin Islands economy would be “vulnerable to new external shocks because serious reforms in public financial management and fiscal consolidation are not occurring as well as no economic diversification.”

“The territory is becoming more and more dependent on federal assistance and the private sector is becoming for the most part weaker and less robust,” he said.