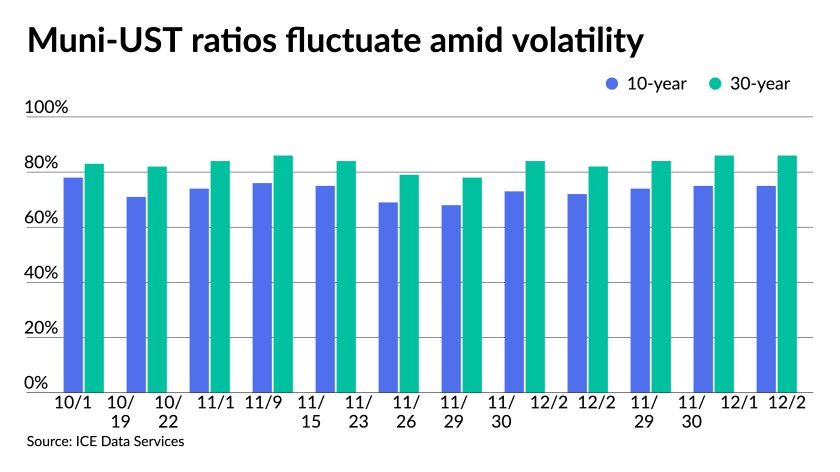 Municipals continued to cut their own path and were little changed with a few large deals taking the focus again Thursday even as U.S. Treasury yields rose and equities rallied.

Stocks rose on optimism the latest COVID variant “won’t completely upend economic activity,” said Edward Moya, senior market analyst at OANDA. “The next couple of weeks will be key in assessing the impact of Omicron. The U.S. already has 70.4% of the population vaccinated and if Omicron does not lead to more severe illness than Delta, we could only be looking at a minimal impact to the short-term outlook.”

Omicron wildcard and the Fed
While Federal Reserve Board Chair Jerome Powell told Congress this week the Federal Open Market Committee will discuss accelerating tapering when it meets on Dec. 14 and 15, economists remain divided about when liftoff will occur now that the Omicron variant is a wildcard.

Powell’s response to questions was more hawkish than his prepared statement and set the stage for faster tapering according to Shahid Ladha, head of strategy for G10 rates Americas at BNP Paribas. “While it is still possible that developments on the Omicron variant end up derailing the Fed’s plans, the burden of proof now appears inverted — unless Omicron proves to be a significant hindrance to activity, the Fed looks inclined to accelerate the pace of tapering.”

Taper should be completed by March, he said, with seven ¼-point rate hikes beginning in June and continuing through 2023.

Insight Investment says the Fed is behind the curve, at least for 2022, in an attempt to help economic growth. “The last thing anyone wants to do is put us in recession,” said Insight’s Chief Investment Officer of Fixed Income Alex Veroude.

The Fed is likely to raise rates for the first time in the last quarter of 2022, he said. “The second [rate hike] depends on when they do the first,” Veroude said, calling it a “borderline” decision between December and 2023.

The baseline projection for the U.S. is that growth decelerates next year, but remains above trend, while inflation moderates at a pace “higher than the comfort level of central banks, but lower” than it’s currently running, said Francesca Fornasari, Insight’s head of currency solutions.

That projection will allow withdrawal of stimulus without much of a taper tantrum, she said. Tantrum won’t be an issue because, among other reasons, the dollar is stronger than it was, and other central banks have already started raising rates.

Of course, she noted, there are risks including inflation falling sooner or staying sticky for longer and geopolitical shifts.

But through it all, expect municipal bonds to remain resilient as a result of “extremely strong fundamentals,” said Daniel Rabasco, head of Insight’s municipal team. Plus, “munis have done well in hiking regimes,” he added.

It remains to be seen how the infrastructure bill impacts volume, he said. “There may be less need to issue debt for capital projects. We’ll see how that plays out.”

Treasuries were weaker and equities rebounded.

Economic data
The only data released Thursday was initial jobless claims, which rose to 222,000 on a seasonally adjusted basis in the week ended Nov. 27 from a downwardly revised 194,000, first reported as 199,000.

Economists polled by IFR Markets were looking for 250,000 claims.

Continuing claims, which lag initial claims by a week, fell to 1.956 million in the week ended Nov. 20 from an upwardly revised 2.063 million a week earlier, first reported as 2.049 million.

Despite the rise, the number “isn’t concerning,” said Mark Hamrick, senior economic analyst at Bankrate. “While we are on guard for any possible impacts from the Omicron variant news, but it’s too early to be seeing that data. There are many questions yet to be answered regarding possible, if any, future economic impacts.”