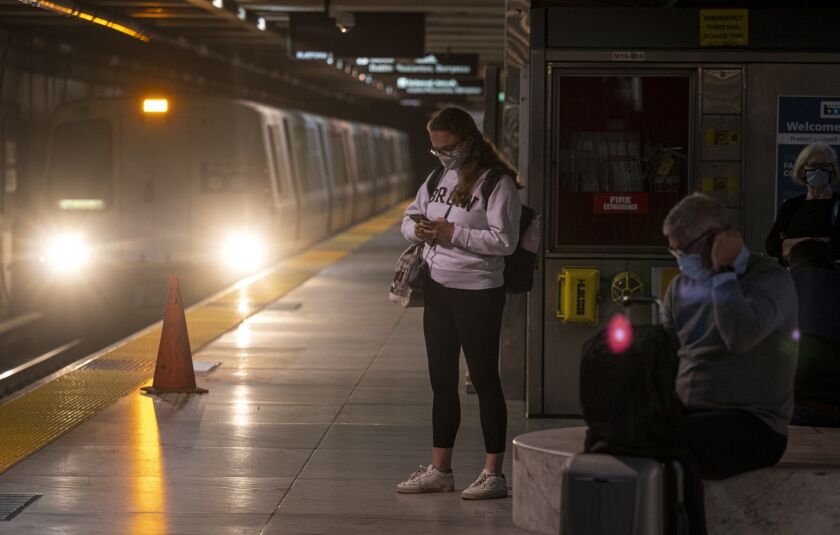 It’s déjà vu all over again for California transit agencies after the U.S. Department of Labor threatened to take away $12 billion in federal grants in a conflict over a 2013 state pension reform law approved by voters.

The department’s determination letter could affect about $9.5 billion Congress earmarked for California public transit agencies in the $1.2 trillion infrastructure bill President Biden signed in November and about $2.5 billion in American Rescue Plan Act grants for public transit in California.

The issue is the Public Employees’ Pension Reform Act, which tweaked allowable pension benefits in an effort, supporters said, to tamp down on abusive practices like pension spiking.

His action reversed a 2019 Labor Department decision and rekindled the 2013 fight between the department and California over PEPRA.

DOL had precluded certification of grants to two California transit agencies in 2013 after determining that in order to comply with the California Employees’ Pension Reform Act of 2013, two transit agencies had unilaterally reduced their employees’ pension benefits in line with what DOL called “substantial restrictions imposed by PEPRA on public employers in California.” Auerbach referenced the department’s original 2013 decision saying that position “was better reasoned and supported.”

That 2013 decision caused Moody’s to put 15 California transit agencies on review for downgrade.

The situation was defused when then-Gov. Jerry Brown signed a bill to exempt transit agencies from PEPRA for up to 14 months while the state challenged the Labor Department decision in court.

The Labor Department ultimately reversed itself and certified the federal transit grants, California won in court, and Moody’s returned the rating outlooks to stable.

But here we are again.

The new determination letter means that Labor will not certify grants for California transit agencies, which means the state’s agencies will not receive federal coronavirus relief and infrastructure money.

Before state and local transportation agencies can receive federal mass transit funding assistance, Section 12(c) of the Urban Mass Transportation Act of 1964 requires that the U.S. Secretary of Labor “certify” that “fair and equitable” arrangements are in place to protect provisions that may be necessary for “the preservation of rights, privileges, and benefits (including continuation of pension rights and benefits) under existing collective bargaining agreements or otherwise” and “the continuation of collective bargaining rights,” Auerbach wrote in his letter.

Gov. Gavin Newsom wrote to Secretary of Labor Marty Walsh, asking him to reverse the decision which he said would “cut off California transit agencies from billions of dollars in federal transit funding.”

“That OLMS [Office of Labor-Management Standards] is doing this during the national emergency caused by the COVID-19 pandemic and disregard of multiple federal judicial decisions is even more troubling,” Newsom wrote.

The decision deprives “financially beleaguered California public transit agencies that serve essential workers and our most vulnerable residents of critical support, including American Rescue Plan Act funds that those agencies need to survive through the pandemic,” Newsom wrote. He added that the recent decision is a complete reversal from the 2019 decision that PEPRA “does not present a bar to certification under section 13(c) – a determination upon which California and local transit agencies have justifiably relied for budgeting, planning and strategy.”

The decision has created “tremendous confusion and uncertainty for numerous infrastructure projects on which California has closely partnered with the federal government and local transit agencies, and in which it has already invested hundreds of millions of dollars in state funding.”

The governor pointed to BART’s Transbay Corridor Core Capacity Program as a significant project that cannot be completed without federal funding.

The project is a package of strategic investments that would allow BART to operate up to 30 ten-car trains per hour in each direction to combat congestion in the most heavily used part of its system. The project includes four elements: 306 additional railcars, a new communications-based train control system that will allow closer headways, a new railcar storage yard, and additional traction power substations to provide the additional power needed for the more frequent service.

BART entered into a full funding grant agreement in September 2020 with the Federal Transit Administration for a $1.17 billion capital investment grant to help fund the $2.7 billion project.

“BART staff have been in communication with a number of stakeholders about this issue and we have been advised the FTA will continue to do business as usual,” said BART spokesman James Allison.

“We have the highest level of confidence this issue will be worked out at the federal level without an impact to BART projects and our efforts to seek grant funding,” Allison said. “We continue to be grateful for the leadership of our congressional delegation and the Biden-Harris Administration for their strong support to fund public transportation.”

Senators Dianne Feinstein and Alex Padilla also sent a letter to Walsh noting that “state and federal courts have ruled multiple times against the Department’s efforts to strip transit funding from California.”

Both said they strongly support federal and state labor laws that protect workers’ rights, including the right to collectively bargain, and it is “undisputed that California’s public employees continue to enjoy some of the most robust collective bargaining rights in the country.”

The senators urged Walsh “to take rapid action to ensure the eligibility of California to receive transit grants.”

A Department of Labor spokesman failed to respond to a request for comment regarding the Department’s response to the Nov. 10 letters sent by Newsom, Feinstein and Padilla.

Amalgamated Transit Union International, a union that represents transit workers in the U.S. and Canada, had filed a lawsuit in 2019 against the DOL that appears to have set the current events in motion.

California Attorney General Rob Bonta filed a cross complaint on Nov. 19 asking for a stay that would require the DOL to honor federal grant agreements with the state’s transit agencies until U.S. District Judge Kimberly Miller can review the matter on Dec. 17.

“Absent a stay of the Department’s decision, California and its transit agencies, which are already struggling because of the COVID-19 pandemic, will suffer significant, irreparable harm pending final resolution of this case,” Bonta argued in the Nov. 19 court document. “The billions of federal dollars in emergency funding appropriated by Congress for the specific purpose of ensuring that transit agencies in California (and elsewhere) can survive the financial fallout caused by the COVID-19 pandemic.

“Even assuming the state’s mass transit systems could partially mitigate the loss of federal funding to some degree by finding other funding sources, they would still be forced to significantly curtail critical services and make other deep cuts, including laying off transit workers and delaying significant infrastructure projects,” Bonta argued. “The harm to transit riders, particularly the disabled, essential workers, and other vulnerable populations who depend on public transit, transit workers, the economy, and the environment will be nothing short of devastating,”

He added that the new determination cites no new facts or law that this court has not already squarely rejected multiple times, according to the AG’s stay.

An ATU spokesman didn’t respond to a request for comment.

Powell, Brainard were quick to pivot away from hikes in 2016
UK 3rd for ETH ownership as crypto adoption grows 1% in December: Survey
Bitcoin price can’t find its footing, but BTC fundamentals inspire confidence in traders
A Frontgate Design Expert And Psychologist Share Tips For Creating The Bedroom Of Your Dreams
Infrastructure Act’s bridge money begins to flow to states